The Story So Far

1994: A dream becomes reality for Kathy Joray, a former teacher who decided to open a Quilt shop. She discovered her passion for quilting and wanted to share her love with others so with the encouragement of her husband Wayne, she opened Quilter's Attic in June 1994 in the Village Centre in Pine Bush.

1995: Just over a year later, they purchased & began the first of many renovations of their current location. When purchasing this large Victorian home on Route 302 in Pine Bush they had no idea of what they were getting themselves into! A small part of the lower level was Quilter's Attic and the remainder of the lower level and the 2nd level became their home.

1999: 3 years later, the Jorays moved to their new home just outside of town. The entire lower level was converted to Quilter's Attic and the upstairs was rented out as office space.

2001: They became a dealer for Pfaff Sewing Machines.

2003: After graduation from college and spending 2 years working as an accountant, daughter Sandy moved into the upstairs & joined the business

2005: With the help of family and friends, a 1,200 square foot addition was added to house the growing business.

2006: Sandy married & moved out. Her apartment was converted into more office & storage space to accommodate their growing business.

2016: Kathy and Wayne retired and moved away! Sandy takes over the business and becomes a 2nd generation owner.

2019: Quilter's Attic celebrates our 25th Anniversary. We thank every one of you for your support, encouragement and friendship that have allowed us to continue this journey.

Kathy, Wayne & Sandy attribute the growth of the shop to their loyal customers. Thank you!!

We are so easy to find and well worth the trip!

From Westchester County:
Take the Taconic Parkway or Rt. 684 North to Rt 84 West. Cross the Hudson River. Take Exit 8. Turn right onto Route 52 West. Continue on Route 52 for 15.6 miles (thru the Village of Walden to the Village of Pine Bush.) Turn left onto Rt. 302 South at light. Shop is the White Victorian on left (3rd house).

From Rockland County:
Take the New York State Thurway North to Exit 16. Take Rt. 17 West to Exit 119. Turn right onto Rt. 302 North. Continue on Rt. 302 thru light in Bullville to Village of Pine Bush. (10 miles) Shop is the White Victorian on right before the light. 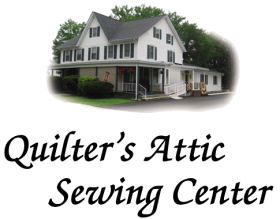